For me to tell you that Yakeen Ka Safar is now a phenomenon of national proportions would be akin to stating the obvious. Anyone who follows Pakistani dramas or Pakistani pop culture even half heartedly is well aware that the hunky Asfandyar is now THE go-to doctor for ‘ilaaj of beemaris of all ilks.

To start off, let me begin with Ahad Raza Mir’s safar – he started off on a somewhat awkward and unsure note in Sammi, his stilted Urdu a marked hinderance in his performance. From there we saw him increasing in

confidence in Yakeen Ka Safar till this latest episode where he absolutely came into his own. The scenes where he struggled with his emotions, torn between punishing his brother’s secretary and his commitment to his profession, were pitched just right, keeping time with the character’s overall arc, not giving into OTT melodrama.

The scenes where he kept walking past his patient’s mother, his Hippocratic oath ringing in his ears were beautifully executed. Well written and nicely directed, the scene took on a whole new life when it came alive on-screen. Well done team and well done Ahad Raza Mir. We have a new superstar in town!

That Dr. Asfand comes off as good as he does is in large part due to Momina Duraid’s very smart pairing of Ahad with Sajal Aly, a much more seasoned actor who is hitting her stride these days. Sajal and Ahad make a great 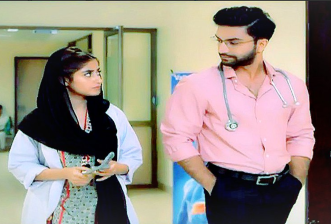 couple on screen and it is easy to be lulled into buying into their tracks.

In my first review of Yakeen Ka Safar I had called this serial a throwback to the good old days of HUM TV, when class and quality went hand in hand, and this is the X-Factor which has been a hallmark of this particular serial since the beginning.  I love the familial interactions, the normalcy of interactions between parents and children, the camaraderie between bhabhi and dewar, all may seem like a no-brainer but check it out and these things are hard to find on TV these days.

Where the acting in general has been spot on, Shaz Khan and Hira have been especially impressive. I enjoyed the bonding between

Shaz and Ahad. They were very believable as brothers and Asfi’s grief at his brother’s passing was , therefore, very real and relatable. With the return to that emotional point in the story Farhat Ishtiaq scored an absolute home run, as we all turned into emotional wrecks, reliving those traumatic moments with Asfi and his family.

That Farhat Ishtiaq is the queen when it comes to understanding and writing about feelings is a no secret. It all started with Humsafar and

after 5-6 years of playing with our emotions, she is a master when it comes to creating emotional graphs for her characters and these skills are on full display here. For Asfi and his family, Urooj’s press  conference brought much-needed answers to lingering questions surrounding Daniyal’s death, freeing the family of the burden they had been carrying all along, allowing them to close that sad chapter and open new happy ones. Yes, shaadis. Asfi’s with Zubiya and Gaiti with Haroon.

Speaking of shaadis, let’s come to my problems here. It continues to be a perpetual frustration to see that every single drama of ours revolves around the masla of shaadi. Why?

I am not against the concept of shaadi, nor do I have anything against a shaadi–wali-happy-ending but to see marriage presented as the only way to complete a woman’s existence, the be-all and end-all of her life, is extremely frustrating.

Much was made about this being a story featuring professional women, but apart from the fact that Zubiya is trained as a doctor and works in the hospital, where else have we seen any signs of ambition and drive in terms of her career? I was thrilled when she convinced Gaiti to use her education to come

work at the hospital, but all this to what end? Just so that she could play rishta-aunty and introduce her friend to Dr. Haroon? And marriage to him would somehow end Gaiti’s “dukh“?

Similarly, Faryal’s return to the scene was also all about shaadi. Why? We were never really told the reasons for her failed marriage, neither did anybody care, but why would she want to remarry after a presumably traumatic divorce? Wasn’t one bad experience enough for her? I get it that Asfi’s quite the catch, but still my question remains… why is shaadi the raison d’être for our drama heroines?

Urooj’s press conference might have brought closure for Daniyal’s family,

but what did it do for Noori, the rape victim with whom the story originally began? I realize there are still a few more episodes to go and this may be addressed later, but no justice for her and no resolution for her family till date makes me question the need to bring up “issues” just to check off boxes? What good are solutions if they come at the end of a long-drawn story? Where is the time then to see the solution put into effect and demonstrate its impact?

After 26 weeks Noori’s rapists continue to roam free, Zubiya is still haunted by fear of anyone finding out her dirty little secret, her mother’s murder is still unaddressed – her father basically walked with that murder, her brother physically abused her (but oh yeah, not his fault because his wife is evil), Khajista’s story was brought up and then glibly elided over. How does all this help raise any awareness – we already know all this. What’s new here? What’s my take home message?

In cases such as these, Zubiya’s badnaami, her mom’s murder or Khajista’s track or the rape case, the solutions I’m being offered are:
a)  hope and pray for karma to take its course – maqafat-e ‘amal
b) hope and pray for karma….
c) hope and pray …
Rest mitti pao on informed intervention or redress. As long as at the end of the day you get the hunky doctor to look at you just so, and you get to go home with the said doctor all iz well.

And all is well indeed …. this is the message that Team Yakeen Ka Safar would like us to take away from this serial, beautifully wrapped as it is with a sparkly bow on top. But do take a second and third look…