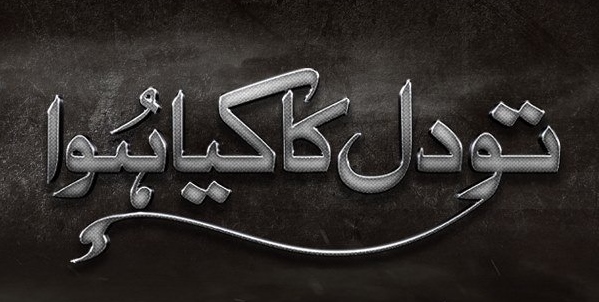 This second episode of Tau Dil Ka Kia Hua was a vast improvement over the first one. Gone were the orange/yellow tints, background music was more in keeping with the languorous feel and repetition of phrases was cut down to some extent. What remained the same, however, was the patented Khalil ur Rehman style of writing: lovely use of urdu language, lines upon elaborate lines full of intricate word play and heavy duty philosophical musings about life, love and complications thereof – beautiful to hear but ultimately with little or no bearing on or connection everyday life situations.

Difficult as it is for me to absorb so much verbiage, directing such a script and getting actors to deliver these florid lines convincingly must be harder and it is to Shahid Shafaat’s credit that he accomplishes this with a lot of finesse. Rehan Sheikh, Sami Khan and Mansha Pasha were great today, the thehrav they bring to their dialogue delivery and scenes is applause worthy. Sami Khan in particular is very good as Faris. I like the little touches hes given to his character and the way he’s pacing his character’s arc.

From what we’ve seen of him so far, Faris is a likeable easy going guy, but it seems like with every additional person who comes to express concern/sympathy/advice it is getting more and more difficult for him to maintain a calm front. I get that with us desis there is little or no concept of private space, but this what we see happening here is a bit too much to absorb. It is as if Faris’ life were playing out for the whole world to see. From the precap it seems like all this overlap between his public and private space does finally get to him. What happens after that point is what I think will be of interest and should push the pace of the story.

The anti-heroine, Maya, though an interesting concept is not written as interestingly. She is the easily played fool unable to see through Saif’s awoved affections. There is no nuance afforded to her, no deeper explanations offered for why she is easily persuaded to walk out on a functional marriage. This simplistic story that we are being given about her is not persuasive enough for me and I can’t buy into this flat-lined shallow character. But where script fails her, I wish the director and actor had worked together to give Maya some more depth and grit. For now the heavily made up Ayeza is not holding my interest.

Unlike Maya, Daria’s is a more fleshed-out character. Bearing a marked similarity to Madiha, from Mera Naam Yousuf Hai, incidentally also played by Mansha Pasha, Daria is a rare breed among our drama ladies, someone who knows her love will never be reciprocated but is perfectly comfortable with that knowledge. Love =/= shaadi for her. I like the sense of calm that Mansha has imbued in Daria, offering a welcome contrast from Maya’s OTT nakhras. Her scenes with Ayeza and Rehan Sheikh were both very well done. Rehan Sheikh as always is an absolute delight.

While this was a better episode than last week’s I cannot help but wish for some movement in the story, figuratively and literally. Not only is the pace slow and the dialogues verbose but most scenes were with the actors seated. This lack of variation in staging scenes adds to the general feeling of inertia that prevades this story thus far. Hopefully Faris’ breakdown next week will shake things up in more ways than one. Let see what unfolds next week.

What about you all? What did you think?