First episodes of much hyped and much anticipated serials are always dicey; the sun, the moon and the stars – all are expected to deliver, and simultaneously at that. Expectations from the opening chapter of Mor Mahal were no  different.

I wanted to really really like it. I wanted to believe we were going to  get the hatke project we were being promised by the makers. The five hundred or so teasers that followed all seemed to hold true to what we were being told, but we’d been down that path before. Disappointment had taught us good. In an industry where TRPs are the be all and end all where is the room left for creativity, aesthetics, experimentation, innovation? And yahan tau we were talking about Mor Mahal which was being touted as one of the most expensive serials ever to grace the Pakistani TV screens… well, let’s just say the assurances read like an oxymoron.

Trepidations in mind I sat down to watch with high expectations.

directed by Sarmad Khoosat and presented by Babar Javed, Mor Mahal is the story of Nawab Asif Jahan and the socio-political intrigues that swirl around him. Be it in the outer world of his realm or the inner world of his harem, the Nawab is the fount of all power, and it is the desire for attaining and controlling the power vested in his person that drives the drama in the jahan of Jahanabad.

Beginning with vast, open landscapes and zooming in to settle in the intimate confines of Mor Mahal, the first episode did well to establish central characters and their characteristics – and what a fascinating, fun bunch of people these guys are! 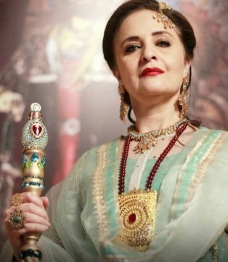 Asif Jahan, the ruler of Jahanabad is so at ease with power it takes almost no thought to signal the end of a human life, a casual flick of his hand and the deed is done. Once he returns home, however, it is a different story. No longer the omnipotent Nawab, Asif is then merely the son of Badshah Begum. He is now
controlled by her, right down to her choosing which of his three wives ought to be his consort of the moment.

For her part Begum Sarwat Jahan, aka Badshah Begum, is the ultimate authority in Mor Mahal. Her son might be feared in the outside world, but on the inside, everybody knows the real ruler of Jahanabad. As political as she is regal, Badshah Begum can run rings around the best of them. She maintains her hold through exercising emotional control over her son and keeping herself aware and

abreast of all happenings in Mor Mahal. Her loyal maids and the wonderfully quirky Akhtari act as her eyes and ears in this endeavor and ensure that her commands are carried out to the letter.

Badshah Begum’s absolute hold over her son – not just his head and heart but also his power – is but naturally resented by Asif Jahan’s two older wives, Suraiya Jahan and Wazir Begum. Suraiya, a maid before she married Asif Jahan, is comparatively passive, fearing for her unborn child’s fate were her husband to stop paying attention. Wazir Begum, on the other hand, is 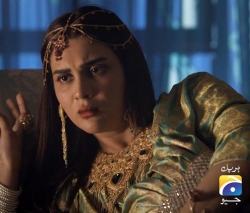 Unvarnished, unabashed ambition is Farrukh Zaad’s calling card. This Begum is no shrinking violet and is not one to waste time moaning and groaning about her fate. Deeds rather than words are more style and what better way to regain her easily waylaid husband’s attention than to ingest some handily available poison. She’s dealt with having to share her husband with a once lowly maid and now she’s damned if she is going to stand by and watch him be beguiled by the charms of Meher Bano, the newest entry in Asif Jahan’s harem.

Brought into Mor Mahal as a result of a political alliance between her brother and Asif Jahan, Meher has zip zilch interest in the Nawab. She chooses, instead, to elope and be with her beloved,

leaving behind her maid Banki, who is then mistaken by Asif Jahan as his newest wife.

Banki is but one more of the interesting characters we met in the first episode. Akhtari, Shaista, Shola Jan, all have their own stories to tell. Akhtari and Badshah Begum have an unsaid equation, as do Shaista and Wazir Begum. These characters may be standing on the margins but their deeds inform and influence all that goes on at the very heart of  the vortex called Mor Mahal.

For one episode, and that too an introductory one, there was a lot that happened and did so seamlessly at a deceptively languorous pace. Sarmad Sehbai’s screenplay flows beautifully, 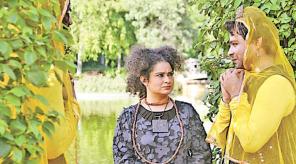 and the poetic use of language is an absolute delight. There were many words and phrases that I had previously only read, never heard spoken out loud, and so this was a special personal treat. Thank you Sarmad sahab  for introducing a whole new generation to the richness and musicality of the Urdu language.

Ornate language and an intriguing cast of characters set the appropriate tone for this once upon a time historical fantasy, and this motif is meticulously replicated and repeated throughout, be it in the sumptuousness of the custom designed costumes or the exquisite jewellery specially crafted for the serial, all go a long way in establishing an appropriate setting for events waiting to unfold. 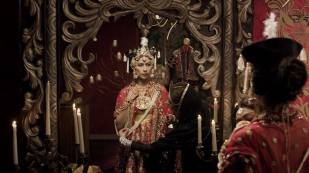 Interior sets aspire to add to the overall ambiance of magnificence and grandeur but fail to do so, coming off instead as tacky and cheap imitations. To give the producers the benefit of the doubt, perhaps it was the mediocre quality video I watched online that was at fault (those who watched live on TV seem suitably impressed with the grandeur) but then doesn’t it behove the channels to put out HD quality prints that do justice to the effort that has gone into a project of this scale? Would greatly appreciate it if the appropriate people could look into this ASAP – thanks!

None of this would matter, of course, if the ensemble cast had failed to deliver. Thankfully, however, this was

not the case. Beautifully led by the born-to-play-the-queen Hina Bayat, the main cast looked and acted the part. Hina nails it as someone who can’t be bothered to explain herself. A look here, a shrug there, every gesture speak volumes.

Umair Jaswal and Meesha Shafi are inspired casting. Umair’s physicality adds gravitas to his portrayal as a warrior and his soulful eyes attest to the softness which is a big part of who Asif Jahan is as a person, add to that his facility with the poetic lingo and it is easy to see why Asif Jahan would be considered a catch in some quarters, his fickle affections notwithstanding.

Meesha too is a perfect fit as Wazir Begum; her delicate features offset by the steely determination in her eyes and the sense of purpose reflected in her stride – she is not a girl one messes around with. Unlike Umair’s ease with the difficult lines though, Meesha’s dialogue delivery came off as a bit stilted. While we did not see this pair together, I thought Wazir Begum shared a very interesting

chemistry with her kaneez, Shaista. “Halal erotica” this might be, but I don’t think we will get any further exploration of this track, something which would’ve really pushed the envelope.

It is good to see Jana Malik play a more substantial role and I am looking forward to seeing how her track evolves. Sania Saeed is in a very different avatar here and her Akhtari has quite a way about her. Adding their particular hue to the colorful tapestry that is Mor Mahal, Ali Saleem made an impression as Shola Jan and I enjoyed Suhaee Abro’s dance, but would’ve preferred it a bit shorter.

To handle an ensemble cast as big as this one, to make accessible a story in a language all its own, to not let glamour and opulence come in the way of storytelling, to resist the temptation to over tell the story, allowing the unsaid the space to be heard, and to do all this so well, all at the same time, is no mean task and for this director Sarmad Khoosat and his directorial and technical teams deserves a huge round of applause. The first episode was Sarmad’s show all the way.

So, to circle back to where I had started, forty minutes later I walked away a happy camper. A few peeves notwithstanding, the first episode of Mor Mahal had delivered, now only 40+ more to go. Here’s to hoping and praying this one stays the course!