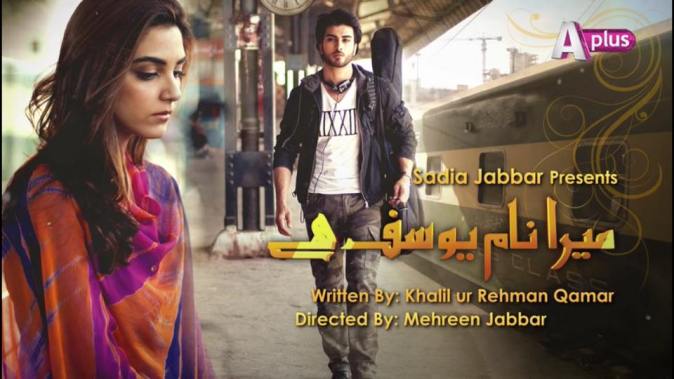 Khalil ur Rehman Qamar, Mehreen Jabbar and Sadia Jabbar’s Mera Naam Yousuf Hai ended its 20 week run on A-Plus last Friday. For fans who’d been hoping for a Yousuf-weds-Zulekha-and-they-live-happily-ever-after scenario, the ending was picture perfect, but for viewers like me, who’d been rooting for the writer to push the envelope and think beyond the shadi scenario, the sappy ending proved to be quite a letdown. That said, for a serial that ended as filmi-ly as it had begun, Team Yousuf deserves credit for delivering quite a few hard-hitting, grim reality checks along the way.

Endemic social issues such as patriarchy, spousal and familial abuse, gender bias, religious hypocrisy, social double standards, all were skillfully woven into a narrative that was never preachy or moralizing. Ostensibly a love story, for me Yousuf goes down in history books as a vintage MJ serial, where the purpose is to not merely to highlight social issues – been there done that – but about offering some very forward-thinking and pragmatic real-world solutions.

Had it been any other serial we would’ve seen a distraught wife who cried and complained aplenty, but when push came to shove continued living with the same husband who abused her not just physically but emotionally as well. What we saw here, instead, was a silken soft woman with a spine of steel. Like other women in her situation, Afia too put up with a lot and shed her share of tears but when certain limits were crossed she did not hesitate to walk out on a long-standing marriage. Afia had lived the bulk of her life heeding what the duniya thought and said, but enough was enough. Where were these omnipotent duniya waley when she needed them the most? Where were they when she had no other way of protecting her daughter other than to tell her to run away from the house in the dead of the night?

I loved how rather than looking to her son or other family members for support, she planned calmly and carefully, secured a place to stay and walked out on Noor Muhammad, daughters in tow, with her head held high. And when time came she did not bat an eyelid when telling the judge she was done – she was finally free.

Also freed at the end was Madiha, freed from the burden of guilt and expectation. Pulling her every which way, not one person stopped to ask her what she wanted. Though they were all saying many things, using long winded flowery sentences, at the end of the day they all expected her to behave like the “good girl” of the past century – give but not expect anything in return. Why? Just because she’d made the mistake of making public her love for Yousuf? Why was it that only Yousuf needed to be saved? Wasn’t she deserving of love too?

Yousuf’s mother wanted her as dawa for her muhabbat ka mareez son, Yousuf wanted her because she seemed like an acceptable second option, one who would help him forget the pain of losing out on his first option, and for Wajih all that mattered was that his son would be loved. None of them seemed to stop and think that even second options have a heart, one that wants to be loved as a first option. I was cheering her on throughout as she refused to give in and then ultimately when she did agree to marry, it was on her own terms. The girl had brains and she did not hesitate to use them. Was physical union was the ultimate goal of true lovers?

The question of physical union being the apogee of love is a vexed one, but for Wajih Ahmed this one seemed like a no-brainer. For him, if separated, lovers suffered immensely. He brought up the example of his life, describing it as unfulfilled, going so far as to equate his situation with that of Afia’s. Here, I have to say Wajih Ahmed’s very sincere belief in his mazloomiyat had me in fits. How could he say all this with a straight face? Like, seriously?!?

After having his every whim catered to by his two wives, he turned around and zeroed out all their efforts on his behalf and claimed to have suffered as much as Afia?! Wow!! Wonder how diminished his dawa of a second wife felt every time her erstwhile mareez-e muhabbat husband made such declarations. It is one thing for a wife to know that she is not the first woman in her husband’s life but to be reduced to such inconsequence is a whole other deal.

All this and then he made it even worse when he added on the bit about muhabbat khud gharzon ka kaam hai. Did he ever stop to think how it made Nudrat feel? What about all the qurbani she had been giving all these years for him, the kamzor man that he was – the one who had let down Afia when she’d come to his door seeking his help?

But then again, perhaps muhabbat is indeed all about khudgharzi. Why, otherwise, would Nudrat still keep pushing Madiha to play the same role in Yousuf’s life, as she did in Wajih Ahmed’s? Now the shoe was on the other foot. It was now her being selfish for her son’s well-being, wanting to see him being cared for by someone who loved him. Also, it made me wonder if that whole dawa for the mareez bit was also her way of rationalizing her role in Wajih’s life?

Whatever Nudrat’s motivations might’ve been, I’m just glad my girl Madiha made the right choice and let the khudgharaz aashiqs be happy together. So yes, for me, Afia and Madiha were the real heroes of the story, they were the two who walked away with their izzat and izzat-e nafs both intact.

As for the hero and heroine of the story, well, what to say. The triumph of Yousuf’s love story represented an end that was as problematic as the begining. I have spelled out my issues with the frame story in an earlier review so will not rehash them here, but needless to say I really wish that Khalil sahab had tested the boundaries a bit more and given us an ending that matched up to the brilliance we saw in the middle part of the series. All this pyar muhabbat shaadi is all good and well, but surely aur bhi ghum hain zamaney mein muhabbat ke siwa…

Overall, as story Yousuf had its fair share of ups and downs in terms of holding my interest. Khalil sahab’s beautiful lines and his command over language never cease to impress, but his writing is now displaying a marked tendency to recycle ideas, situations and plot points that have worked in the past. This kind of intellectual laziness does not behoove a writer as talented as Khalil sahab, and I sincerely hope Mera Naam Yousuf is the last story of is kind from his pen.

Even as the story went through its ebbs and highs, the one thing that remained consistent throughout was the high standard of story-telling, as the written words transitioned from paper and became visual images on screen. Mehreen Jabbar is the best director in Pakistan and this serial is a testament to her narrative skills. There was much here that could’ve gone awry – situations too filmy, lines too flowery, dialogues too long, characters leaning towards caricatures – but all was kept in check with a firm hand, and the story allowed ample room to play out with all its nuances intact.

Qasim Ali’s cinematography made this one a visual delight; there are so many scenes that stand out as I look back, scenes which left an impression in the way they were framed, lit, and shot, and the depth and nuance they added to the overall narrative. The bright color palette was a brilliant way to offset the darker undertones of the story. Editing was of the highest standard and the sound design was of the level where it should be studied by others in the field. Saad Sultan did a fabulous job with the various songs and the OST. Bringing all this together and making it all work just so was the very talented cast ably led by Hina Bayat. Her Afia will not be an easy one to forget. Mansha Pasha was another one who really impressed here.

Finally, a huge round of applause for producer Sadia Jabbar for putting together such a fabulous creative team together and providing them with all the resources necessary to deliver such a beautiful project, and that too which ended in twenty episodes!

And so we close the books on Mera Naam Yousuf Hai. Two thumbs up guys- you’ll all be missed!