As it turns out pichley haftey kaafi saari bongiyan maarne ke baad bhi Behroze ka dil nahin bhara and so today we got to see more of bhai jan in action. I am in no way condoning all that Ruhi said in this latest episode but will say that she had plenty of reason to be angry, but then again had she watched this clip beforehand she wouldn’t have been surprised at how it all went down… kyon ke it is all about keeping the dead (or nearly dead) happy.

Apart from Behroze and his tiresome me, myself and I rhetoric – mere paas waqt kam hai, mere bhai ki rooh ka sukoon, meri ghalati, mera faisla, meri beti, mera baap, mera bhateeja, meri biwi ki badtameezi – which pretty much spanned the length of the entire episode, and Ruhi who has been made to spout dialogues that make her sound like the nastiest person alive, even though what she is saying actually makes sense, there was little room left for others to make their presence felt.

But then again, when you have an accomplished actor like Abid Ali, with some of the best lines in the serial so far, it is no surprise that he makes each and every scene count. His warm greeting for his naraaz bahu, expertly covering up for the awkwardness at dinner, continued warnings to Behroze to not repeat the mistakes of the past, and finally the best scene of the episode, his conversation with Ruhi, where after putting up with Behroze for a bit he finally kicked him out.

Had Behroze been paying attention to what his father was actually saying , rather than being focused on how and when to butt in to the conversation, he would’ve  definitely picked up a valuable lesson or two from senior Khan sahab. The way Agha jan apologized – humbly owning up to his mistakes, generously extending an olive branch, and graciously requesting her to forget the past and focus on the present – is how Behroze should’ve approached this whole meri beti ki shaadi issue with his wife. But nahin. All we got was Behroze and his bull in a china shop approach and when all else failed he came up with the handy dandy talaq ki dhamki – what the what???

Yes, I am very annoyed by these characters that jump from one extreme to another. And on jumping from one end to another, wasn’t Fara supposed to be 18? Her speech and mannerism was in such sharp contrast to the confident way she handled herself back in Lahore. Maya looks the part, but her act as an eighteen year old is not convincing at all. Her questions to her cousin were rude. Yes, these people and surroundings are new to Fara, and she has been influenced by her mother, but surely there is no reason for regressing to behaving like a 10 year old. Similarly her wide-eyed manner when she asked Behroze about his arguments with Ruhi, or the way she sat at the table listening to him go on about his ghalati aur us ki talafi, all seemed weird for an 18 yr old, although it was a nicely done scene. And, about that scene, instead of watching Behroze reminiscing it would have worked far better if we’d seen it in flashbacks. If nothing else, Suhaib’s appearance would’ve given us a break from the tedium of seeing Behroze in almost every scene.

The few scenes where we were spared Behroze were those of the younger generation and a scene of Arjumand’s. Osman is effective as the mature, level headed, a bit too perfect (teetering close to bland and boring) Wali. Enjoyed the way he shut down Fara a couple of times and also tried to tell off Zarminey, so glad she refused to be intimidated. Mariyam Nafees’ Zarminey is fast becoming one of my favorite characters in this serial. In large part because she is perhaps the most natural out of all these unnaturally aging and regressing characters.

An on aging, I get that 21/22 year old Wali has had great responsibility thrust upon him at a very young age, but dressing in a style better suited to a much older man is not working. Infact, given the world of difference in the way Wali and Fara were dressed, he like an uncle and she like a kid, Wali actually looked pretty good standing next to his aunty Ruhi in the first scene of the episode.

Along with Zarminey, her mom Arjumand is another character I am enjoying, now that she’s done with her share of flipflopping.  I like that she’s been shown as a real person, someone who finds it hard to let go of older hurts but has enough of a sense of dignity that she will not make a tamasha of herself in public. Hence the heartbreak and pain remains confined to when she is alone and within the privacy of her bedroom – I so wish Ruhi’s had been a similarly nuanced character. Also the scene with her children was done very well, as was the awkwardness of the first meeting with Ruhi. Hareem is very good as Arjumand, just wish these actors had been aged well. As can be seen in the clip above, Atiqa Odho looks so much younger than Hareem and Sanam do in their aunty type 50 shades of grey avatars.

Overall, this was a better episode than last week in terms of building dramatic tension. A shout out to Haseeb Hasan and his DoP for that very nicely done visual of the wooden pillar between Behroze and Ruhi in the dinner scene. This is the kind of subtlety that I hoped and expected when I had read Haseeb’s name as the director for this serial, but apart from a few fleeting glimpses here and there I have been disappointed by this heavy-handed approach to story-telling. 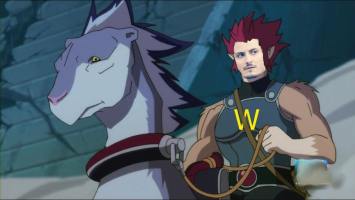 Many among us had been waiting for the Wali-Fara track to begin, but now that we got their first scenes together, apart from that one line about his hunting, riding, swimming, and what not, there was nothing really that stayed with me.

In terms of acting Abid Ali is undoubtedly shining in a role that seems tailor-made for him. Sanam Saeed, is doing all that she can with her flat character. Her stiff body language, when Ruhi was in Agha jan’s room, was right on the mark. Mikaal is good as Behroze, just wish he had better things to say and do. Osman and Mariyam have great chemistry and theirs is the only pairing I really like in this serial so far. Maya Ali can do so much better than what we saw her doing today, hopefully as the character matures Fara will become more relatable and real.

Finally, as I sign off, can someone get the promo editors and the episode editors to confer with each other before airing promos and precaps that promise us things that the episode fails to deliver? On editing, can we please get better, more imaginative ways of cutting up long scenes? And what was that with the badly photo-shopped image of Suhaib?

Needless to say, for a serial that should’ve by now become an automatic must watch, the cons continue to outweigh the pros.