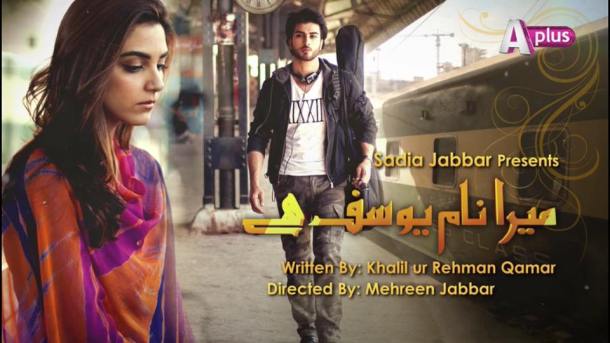 Like any beautiful work of art Mera Naam Yousuf Hai is an absolute pleasure to watch. Khalil sahab’s lines are hard hitting and sharp, the acting is top notch for the most part, Mehreen does a fabulous job as a director, the DoP, Qasim Ali, makes every frame a visual delight, the editor and sound editor create new standards of excellence with every episode, the producers have pulled out all stops, and the picture quality is to die for. Why then am I not wowed by this one? Why is it that week after week I have to remind myself to tune in? Why am I not at all keen to know what happens next?

The answer, in my opinion, lies in the fact that Mera Naam Yousuf has everything going for it except one very basic component – an original story. The script is sharply written (it is easy to see why Khalil sahab would not want anybody messing with his words), but mellifluous lines and beautifully executed scenes cannot a serial make – there has to be something more tangible and meaningful that holds everything together.

What is being passed off as “new” is nothing more (at least up until this point) than a reformulated version of what we’ve already seen in Sadqay Tumhare (and Pyare Afzal as well, I am told by those who watched that serial). The difference lies in the re-packaging of the basic plot and a reshuffling of the context and characters. Yes, there are variations in terms of the writer’s underlining of the hypocrisy and double standards that exist in our society, but the glorification of a what in real life would be unquestioningly termed as awaragi, and the declaration of a loafer’s chichori harkats as divinely inspired ‘ishq wala love strike a very familiar, sour note.

Our patriarchal desi society already has problems galore when it comes to not listening, forget about actually paying attention to the voice of the woman, to hear what she is saying. To give them credit, Team Yousuf gives us an up close and personal look at one such family where the female lead is being pulled in two different directions by her quarreling parents, both of whom want her to marry a guy of their choosing. She, to her credit, is not persuaded by her parents’ picks and remains steadfast in her decision to not marry either – actually she doesn’t want to get married, period. So far so good.

The entry of a third unrelated guy in this already stirred up pot is presented as an unexpected alternative for our beleaguered heroine. In theory I am with the plot so far, but what makes this third guy track so unsavory is the fact that ONLY he is interested in her, she has no interest in him whatsoever. It is from hereon forward that I have huge issues with the implications of what we are shown. No matter how disinterested a girl might be, no matter how many times she says NO (loudly and clearly so that there is no mistake) any guy who imagines himself to be in love will still keep pursuing her. Why? Why is the first No not enough?

Yousuf first sees Zulekha in a train. From there on he tries to make zabardasti ki conversation with her, harasses her, stalks her sister to see where they lives, shows up at her doorstep, sends a friend to persuade her, and when all else fails he shows up in her bedroom. In all this he is helped by friends who actively help him in his pursuit rather than talking some sense into him.When did such behavior become acceptable? Acceptable enough that such a guy is being declared a lover and a hero on primetime TV?

If from now on any raah chalta guy claims to be in love with any raah chalti gal should we be okay with any and all stalking and harassment that follows? Just because he is in love with her the girl loses her right to say no? And then we are told his love is divinely approved because she is a Zulekha to his Yousuf. If so then god help all girls named Heer and Shireen and Laila and Sohni and Sassi – bibiyo sanbhal ke rehna kabhi bhi kaheen bhi koi Ranjha ya Farhad ya Majnu ya Mahiwal ya Punhu se aap ka takra sakta hai!

Don’t get me wrong I am a sucker for romance and have no interest in being the moral police, but this kind of gradual normalization and glorification of what should be universally unacceptable behavior, particularly in a society which is getting increasingly claustrophobic for a woman, is deeply troubling. As it is after three back to back serials from the same writer we have already become inured to words like kamina and khabees, both a strict no-no in my family till today.

Speaking in broader terms, about not just this particular serial but others of this ilk as well, that approach issues such as eve teasing, stalking, harassment, molestation, etc, with a wink and a smile, it is very easy to dismiss these concerns: Who really cares, its only TV, nobody takes this seriously, etc, but as recent writings on the impact of Bollywood on Indian society have demonstrated, this is not a matter to be taken lightly. Agreed, not all ills in the society are to be blamed on the media, but the fact that a correlation does exist is not to be taken lightly.

An important fact to keep in mind is that these writings, linked above, are talking about films that are: a) rated for content and language, b) one pays a price for entry, and, c) are over and done with in three hours. By contrast our popular serials air uncensored at prime time, for over six months at a stretch (given an average run of 24 weeks), without any prior warning about language and content. Add to this mix popular good-looking actors and we have innumerable easily impressionable minds unquestioningly flipping over the “cute and filmy” romance.

Coming back to Mera Naam Yousuf Hai my ranting/venting is based on all that has transpired so far in the first 7 episodes. I am hoping and waiting to see how things turn out as the serial progresses; I will be the first one to cheer if and when Yousuf admits to his idiocies and gets off his muhabbat wala high horse. But for now despite the bells and whistles I remain unmoved.