Having made it very clear last week that I’m not watching this one to exercise my brain, I am happy to report the second episode of Ahista Ahista was just as enjoyable as the previous one.  Even though her story moved along a very predictable path, I enjoyed watching Aliya Bukhari’s interestingly etched characters coming into their own.

From a very masoom and confused Haya, to the increasingly desperate Sofia, the typical mother Bi Jaan – beta t

here was a reason I never allowed you to watch Lollywood films otherwise you’de have seen through my emotional blackmail, to the very loving and concerned, in fact too good to be true, Shirin, the very milquetoast kinda Safeer bhai, and finally the biggest loser of them all, apne so-not-a-hero Zavar sahab, we saw a whole range of personalities on display. There was plenty of scope for OTT-ness and theatrics, particularly when Saba Hamid seemed like she was just about to start channeling Bahar Begum, and I thought ke chalo ji yeh serial tau gaya kaam se, Haseeb Hasan, the director, ably reined it in and we were spared the heavy duty waterworks. But even the two tears and one hichki were  enough to ensure that the family matriarch got her way as her farrmanbardar beta  forgot

all about his wife in San Francisco and caved in.

Zavar, on the other hand, looked like he was suffering a serious mazloomiyat ka bukhar. But no matter how he might rationalize his harkats of the past few years, the fact of the matter is that he was/is a weak man. Pehley lying to his doting mother and now to Sofia, and going by the promos Haya is well on her way to becoming the newest member of the ladies-lied-to-by-Zavar club.

of them, I feel the most for Haya. Having lost her parents at a very young age, she was brought up in a household filled with adults. Every step of her life has been taken in accordance with the dictates of her elderly, puraney khayalat wali Bi Jaan. Living in this very protected, and somewhat suffocating, bubble, Haya has no clue of what lies outside the gates of her aunt’s haveli, much less the life that awaits her in the US. Till date, apart from the adults in her family, she has only had homeless cats and injured birds as friends; perhaps she feels a certain affinity for them. Few are the moments when she can

indulge in horseplay with the neighborhood kids. It is no surprise then that Haya is both fearful and excited by the prospect of this marriage. She looks forward to when she can live as she pleases, in a home that would be hers. But that would be then, for now her concerns are gently allayed by Shirin.

While Haya is happily planning a life with Zavar, Sofia is going nuts trying to ignore the voices inside her that tell her that things were not quite as simple as Zavar was making them sound. 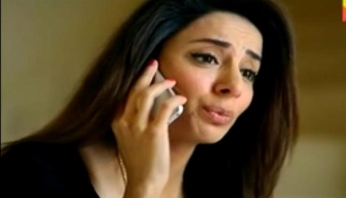 We dont have much of an insight into Sofia’s character so far, and I look forward to knowing more about her. How did she meet Zavar? Even after four years of marriage why is so clingy and insecure about her relationship with her husband? How come they don’t have any children? Or is it her inability to conceive that drives her fear? In any case no matter what the reason might be, there is never any excuse for a husband to lie to his wife, and yahan tau tau shohar sahab was rachao-ing a doosri shaadi, and that too with a girl more than half his age! Needless to say by the end Zavar had firmly established himself as a serious contender for Mansoor’s mard-ke-naam-pe-dhabba  award.

Once again the honors for this episode lay with the director.

The narrative flowed very smoothly, there were no long drawn out scenes, and visual interest was maintained in the way the set was used in terms of actors’ movement. Like in the previous episode here too the San Francisco track was never forgotten and Sofia was very much a part of the going ons in Karachi, even if in spirit or via her phone calls. Adnan’s voice over at the end was beautifully superimposed over shots of a pensive Sarwat Gilani. Weak as he is, Zavar might think about how he would explain himself to his wife, but he would never have the guts to give voice to his thoughts. Very nicely done! Also well done was the rain sequence. We know barish has become de rigueur for dramas these days, but this h

ere was an innovative take on a rain scene and was as aesthetically shot as the iconic Khirad and Ashar one. Loved the shot of the wet grounds after and that lone plop of water – loved it!  The interior shots, lighting in the corridor, shots of the living room, Bi Jan’s room, the exterior of the decorated haveli, all serious eye-candy stuff. The attention to detail in the background is impressive. Really enjoyed the scene with the girls practicing their dances while Haya got her mehndi done. All this coupled with very good editing make Ahista Ahista a great watch.

As for the actors all are doing justice to their characters. I liked the way Sarwat portrayed Sofia’s increasing anxiety. Mawra is a complrete surprise. For once her makeup and styling are age appropriate and I think this is

her best acting to date. I was not a fan but am liking her here. The other senior actors were all great as expected, but I am having a huge problem with the fact that Adnan Siddiqui, Hina Bayat, Saba Hameed all seem to be in the same age group, give or take a few years, and to see Adnan playing Saba’s son is ridiculous. In all this I am so glad that Hina was not asked to put on a whitener and purposely age herself. She looked absolutely stunning as she danced in that lovely blue outfit. Watching Hina and Saba Hamid, with her ugly grey streaks, I wonder why producers  and directors insist on aging our not-so old actresses whereas men in the same age group get away with playing eligible bachelors, and finding brides barely in their tweens. Yeh naa-insaafi nahin tau kiya hai?!

So yeah, tired old story or not, I am still enjoying this one, what about you all?