“All roads lead to home,” says Mrs Khan to Kuku.  Mrs. Khan is not wrong. All roads, not matter how impassable they might seem, no matter how potholed they might be, do eventually lead home.  No matter how far or how long the the journey we always return home. Home is not the stone and mortar building, nor an address where strangers reside. Home is where we belong, where memories are made.

Home is about sharing and celebrating moments of pleasure and pain, laughter and tears, joys and sorrows. Home is what shareek-e hayats make out of a house. A marriage unites two strangers, but shareek-e hayats are not merely a couple sharing a bed, bills and bacchas. Shareek-e hayats are soul mates, equal partners, humsafars. It is their love  and respect for each other that breathes life into a soulless structure, transforming a khaali makaan into hamara ghar.  For innumerable couples all roads do indeed lead home, but what about women like Kuku and Laila? Or for that matter, even Mrs. Khan? Where do their roads lead? Where is a place they can call their own? Where is their home?

Kuku is a realist. A pragmatist, she has seen a lot and been through a lot to believe in happily ever afters. She and Khurram might have reconciled, but she knows that this togetherness is no more than a facade. They are merely roommates in a house.

Khurram might be her husband in the eyes of the law but he is not her shareek-e hayat. That kind of an equal partnership requires more than a patronizing pat on the head: “Bohot progress kar rahi ho baby. I am so proud of you. Isi tarah mehnat karti raho baby. Well done!” A soul mate would not lie about paying bills nor would he be happily dancing to loud music while his wife labored to pay for his non-existent business ventures. Forget about easing her burden or sharing her worries, this husband sits back and adds insult to injury: “Aurton ko tum se sabaq seekhna chahiye, kaisa zabardast business set kar liya tum ne apna.. zindagi chala rahi ho… aiwein aurtein shor machati rehti hain yeh nahin ho raha woh nahin ho raha.. you are a  role model, Kuku! A role model!” Forget about making a home with him, this man is not even worthy of sharing a house! Aarghh!!! Kuku!! Dump him jaldi sey, warna woh meray haathon mara jaayega!!

Unlike Kuku, this is Laila’s first brush with the bitter side of life. An only daughter, pampered by her adoring father and raised under the eagle-eye of her firm but well-intentioned mother,

Laila had seen life through rose- colored glasses. A simple girl, she was  easily pleased – spending time with her beloved father, long drives, eating bhuttas by the wayside, enjoying poetry. The only thing she had asked of her parents was a chance to study abroad, to spread her wings. While her dreams, to study abroad, were easily swept aside by her mother’s socially conditioned logic – saheeh umar, khandani izzat, shareef larka, bara ghar, ameer log –  little did she realize that marriage would entail not only giving up her ambitions but also ask her to leave her simple pleasures behind. Where was the joy in a long drive if her partner did not even acknowledge her presence?  Was this what her mother meant when she said that marriage would complete her life? Why is it that a marriage to tameezdar mature 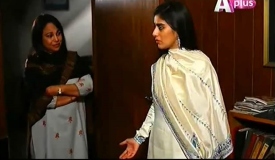 mard seems to have robbed her of a home? As Mrs. Mansoor she is an honored guest in her parent’s house and as a newlywed Laila is unsure of her place in her in-laws’ house. Her husband wants her to move out of the frame when he’s taking pictures, would such a man allow for her to move in to his life? Though willing herself to believe otherwise, Laila cannot help but question whether this patently disinterested man is her shareek-e hayat? Why do her roads not seem to lead home? Why does she feel homeless? Where is her apna ghar?

At this point Laila is ill-equipped to be a wife to a man as complicated as Mansoor. Time though is a great teacher and our young bride too will learn: either we will see her  evolve and become a force to reckon with or she will give in, accept life as it is and convince herself of her happiness. 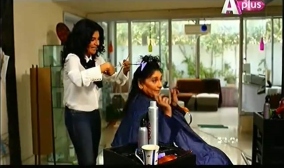 Perhaps like Mrs Khan? Here we have another woman in a marriage that diminishes her, leaves her unsatisfied, makes her insecure, but rather than weeping her eyes out, Mrs Khan talks about pruning and snipping off dead weight. While she is happy to part ways with the unpleasant relatives, the root cause of her unhappiness, her husband, remains firmly ensconced in her life. He is not going anywhere and he never will. Losing him would be akin to Mrs Khan losing herself. Mrs Khan derives her pehchan from him. We don’t even know her first name! Even as she shows Kuku her way, I wonder when if ever will Mrs Khan realize she too is travelling in the wrong direction. All homes are houses but not all houses are homes.

While these three ladies will take a while to pehchano their way home this serial has definitely found a permanent ghar – in my heart! Though we are only four episodes in I have no qualms in admitting that I am in love. I had goosebumps while watching and that happens only rarely.

Bee Gul, its been a few hours since I watched the episode and am still mesmerized by your words. Khalid Sahab you have created magic. The fluency with which you tell this story is a joy to behold as we adroitly move from the present to the past, from Kuku’s house to Mansoor’s house. Naveed Malik’s visuals add yet another layer to the narrative. How beautifully was Khurram and Kuku’s rocky marriage contrasted with the cold relationship between Laila and Mansoor.

I have seen all these actors do very good work before, but this outing has to

be counted among their career best. Iffat and Alishba are outstanding. Alishba in particular is a revelation. Sohail Sameer is perfect as Mansoor. Fawad Khan makes me wanna to do some real harm to the loser Khurram. Anita Camphor is so very good as Mrs Khan, loved her hair cutting scene. Parveen Malik was great as a mother totally oblivious to her daughter’s inner turmoil and Qazi Wajid was simply fabulous. The locations are fabulous and each and every scene has reason and meaning – not an extra word or frame. Brilliant stuff Team Pehchan!