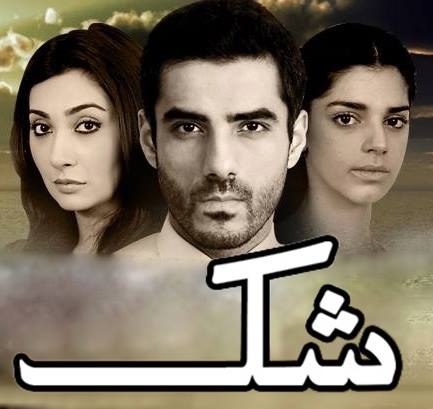 Let me begin by applauding Yasir Nawaz for his on point direction – I can’t remember the last time I looked forward to an episode with this much anticipation and expectation. As the story played out I got annoyed, angry, frustrated, aggravated – you name it and I felt it – but majaal hai ke remote ko zara bhi takleef di ho … I was glued!

If a drama is meant to entertain then Shuk wins a gold medal. If  the purpose is to make us look beyond the obvious and push us out of our comfort zone then Shuk has achieved its goal. If it is meant to make us re-evaluate what we perceive in absolute terms then Shuk has passed the acid test. If the point is to get us to to reflect on contemporary society and social issues then Shuk has succeeded in generating a heated debate: Is falling in and out of love that easy? What does marriage mean in this day and age? What does fidelity mean? How important is it to trust your spouse? Can a marriage survive without trust?  How much strain can a marriage bear?  How much effort is a marriage worth?  When is a spouse justified in walking away from a marriage? How accepting are we of divorces? Is the sautan always in the wrong and the first wife always a sati savitri? How comfortable are we as a society with the notion of a divorced woman living on her own?

For the past few weeks Shuk has had us all in a tizzy – whether we agree with Samira’s twists and turns, whether we find this scenario plausible or not, whether it mirrors our socio-cultural realities or not, aisa hota hai ke nahin aur agar hota hai to hamarey haan nahin hota  – all issues have been rendered immaterial. Such is the grip that Yasir has on Samira’s story that all of us are on the edge, waiting for a resolution. How are these three going to extricate themselves from this mess, where nobody is right but then nobody is wrong either. All have their own sets of justifications for their actions. For me this is no longer about Sham and Sania and Sehrish and who will divorce whom when …. this to me now more a story of three very fallible people who find themselves in an impossible situation. No matter which way they go somebody or the other is bound to get hurt. Simply put Shuk is an intimate study of ordinary everyday people, nary a hero or villain among them.

Echoing my earlier sentiments I don’t buy the story in and of itself. There are way too many loopholes in the overall logic. That said, what I am really appreciating here is the idea of Shuk as an analysis of human behavior. What we have here are inherently good people, nobody out to cause harm or make others’ lives difficult. But somehow despite the best of their intentions they end up in an utter mess, which is as much of their own making as it is not. Both ‘Sham and Ali have their mashriqi mardana egos. Among the women, Sehrish has her insecurities vis-à-vis her childlessness and Sania has her share of issues given the past circumstances of her life. Add in to the mix a bunch of trouble makers and you have the perfect recipe for making mountains out of molehills. We have seen this kind of a story play out in other serials too, but what makes this one stand out is how Samira has succeeded in showing us how different the same story looks from every character’s perspective. Even as we want to shake Sania or are aggravated with Sehrish or detest ‘Sham, we cannot but help empathize with them at the same time.

It is to Samira’s credit that as a writer she has not imposed her own judgement on any of the characters, allowing them instead to chart their own paths, mistakes and all. The implausible scenario has been delicately juxtaposed against the very relatable frailties of these characters. And here Yasir has done absolute justice to this very nuanced script. The tension has been pitch perfect as the inner pendulum of these characters swings from one end to another. As this episode progressed it was really hard to not feel for Sehrish, clutching desperately as she was at straws to save her flailing marriage, but earlier I wanted nothing more to put one of Rumi’s famous band aids across her mouth just to get her to zip it – the lady just wouldn’t stop with her stories of lasagnas and crepes and frittatas! Needless to say Aisha stole the show today. Not to be left behind Adeel rocked as ‘Sham and Sanam was great as Sania. And here, I must commend the technical crew for their editing and Naeem Mustafa, the DOP, for his fabulous camerawork. Great job team Shuk!