Nine weeks in and despite hitches and glitches galore – slow pacing, some atrociously bad acting and lax editing – Numm has me hooked. And, that says a lot for Myra Sajid’s intriguing story, Ahson Talish’s direction and the stellar acting by two of the three main leads. BUT, and this is a BIG BUT, this appreciation should not be taken to mean that either I or the other Numm viewers have the patience of Job. I am bewildered as to why the channel and/or producers think it kosher to have two versions of the same episode floating around? Aisa kab aur kahan hota hai?? Is this supposed to be some kind of joke? If so, its in very poor taste. So far we’ve seen different endings, altered sequences of scenes, and now the latest – episodes with and without back ground scores – yeh sab kiya hai?? I would love for someone to come forward and explain the rationale behind having two versions out there…

With this rant, against Geo/producers/whoever’s responsible for all the ghaplaas, out of the way, let me say that story-wise I for one found this to be an engrossing episode. 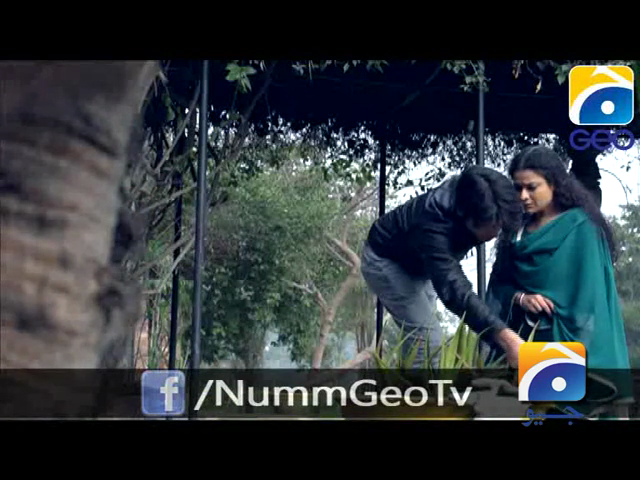 Whatever awkwardness or confusions had existed in Wali’s mind, after that stormy night, seemed to have been laid to rest when he had stepped up to help untangle Mahjabeen’s dupatta in the previous episode. The sadly short but very cozy breakfast table scene confirmed that indeed, Wali and his vani had turned a corner in their relationship. Where there had once been a comfortable affection we now saw a different kind of nervousness, an awareness, and for the first time ever we saw Mahjabeen’s eyes smiling.

Unfortunately though, Mahjabeen’s happiness proved to be short-lived. Neelam’s surprise entry pretty much ensured that whatever had happened between Wali and his vani now became a thing of the past. The rightful bahu of the Bakht khandaan was back and staking her claim in no uncertain way. Firing and later re-hiring Salima is her way of reminding everybody of her status in the household hierarchy. Only she has the power to do so while Mahjabeen can only stand by the sidelines and watch the whole drama play out. Grinning like the cat that got the canary, Neelam is absolutely thrilled at her first victory.

The contrast between the two women in Wali’s life could hardly be greater. Unlike his child-bride who is quick to fly off the handle, irrespective of who she is dealing with, the composed Mahjabeen is the epitome of calmness. Her mature handling of the gardner’s unexcused absence last week and this week stands in stark relief against Neelam’s OTT response to Salima’s minor transgression. And its not just the servants that Neelam is enjoying lording over, for now she’s also thrilled to have Wali wrapped around her little finger.

For how long will Wali be happy playing the role of a uxorious husband is something that time only will tell.

While some things are going Neelam’s way and she’s enjoying throwing her weight around, there is plenty of other stuff that has her womanly radar on full alert. Apart from trying to find the reason behind Mahjabeen’s newly colored hair, she is also suspicious of Wali and his vani’s new found coziness. Though Wali tries to fob her off, I doubt that a tenacious girl like Neelam will be as easily distracted by her hot husband the second time around. Seems like we have some fireworks coming our way in the next few episodes.

As Wali and Neelam figure out their, what promises to be a stormy, relationship, Mahjabeen is preoccupied with worries of her own. As it turns out the mysterious young man from a few episodes ago was not someone from her past, rather he is some whom she loves dearly in the present, and it was him that she had gone to meet last week. How and where this young man fits in Mahjabeen’s already complicated life is something we learn next week.

So far, I am happy with the way the story is progressing. It is to writer and director’s credit that the complexities of each character are being handled such that there are no heroes or villains. All we have here are human beings who stumble and fall, and feel pain and joy just like the rest of us. The pace was relatively better today, but there were still plenty of scenes that needed to be shortened. Salima’s crying really got on my nerves, so much so that if it were up to me she would have been sent home with the driver, rather than having her waiting for her brother and cry some more – alas Mahjabeen is a bigger and better person than my petty Salima-hating self! Similarly, Mahjabeen checking her hair is something that has been repeated so many times that I think by now even the most clueless viewer gets it – please, we don’t need to see it again and again.

In an episode with long scenes galore, it was a surprise to see that the one scene, the breakfast scene with Wali and Mahjabeen, which many had been looking forward to since the first promos, was cut off so abruptly. A few seconds longer would have added that much more impact to Neelam’s entry scene. Additionally there were also continuity issues. By now it is evident that Fawad Khan came to the set with four or five shirts, but to show him wearing the same blue striped shirt two days in a row does nothing for his character as a rich feudal.

That said, Fawad and Sania absolutely sizzle together, I so wish that the breakfast scene had been slightly longer. Sania’s expressions when she looks at her reflection, while toweling her face dry towards the end, were priceless. Yes, Mahjabeen is a hard core realist and does not believe in happily-ever-afters, but still in that moment her vulnerability was beautifully expressed. Yes, she knows Neelam is no more than a young twit, but to have that twit in the next room with the man who was with her just a day or so ago must be a bitter pill to swallow.

Watching Kanza perform alongside Sania is simply painful, and I’m being very kind here. For the first time in a long time Fawad Khan failed to impress – I guess there is only so much an actor can do on his own. Though he shines with Sania, all of his scenes with Kanza, which should have been sizzling hot and electric, sadly seemed flatter than a deflated balloon. I’m sure Kanza’s worked really hard, but playing the very complicated Neelam is no child’s play. The scene with Minahil Neelam and their mom was another one that had me gritting my teeth.

So yes, a mixed bag, but the story and the way it is unfolding has me hooked. What did you all think? Are you still on the Numm bandwagon? Looking forward to reading your thoughts!