Six weeks in and Numm continues to spin its web, its gossamer thin silken threads drawing us deeper in to the darkness that lies behind the grand facade of Wali’s haveli in Lahore. A deceptively slow paced episode, this one offered many an insight into three very complicated lives. Ostensibly these three live, breathe, function and feel just like the rest of us, but that’s where all similarity ends. Nothing in their lives is anything like we have or will ever experience.

Wali, Mahjabeen and Neelam inhabit a whole other reality. Nobody is allowed into their private anguished worlds. They have secrets they cannot share with their friends, their struggles are their burdens to bear, and though they appear free to go about of their own volition, if truth be told they are no more than prisoners; buried under the unseen weight of archaic customs, outdated cultural practices, and the insidious mix of feudalism and politics, these three do not breathe a single breath of their volition. From the heir apparent, to the vani, to the khandani bahu, all are like puppets whose strings until recently had been superbly manipulated by the seemingly invincible Baray Sahab.

What Baray Sahab has not realized as yet, is that he was premature in his celebration of Wali’s coming of age in the last episode.

Wali has definitely cut off the umbilical cord, no question about that, but whether he has done that to follow blindly in his grandfather’s footsteps, and uphold the feudal legacy, along with its attendant ugly baggage, remains to be seen. We’ve seen him question the system, but how far is he willing to go to change it, and can he even change anything so deep rooted, is something that time will tell. So far the only place Wali has really flexed his zamindarana muscle is when dealing with Mahjabeen and the servants. The way he is quick to fly off the handle at those on the lowest rung of the power structure says a lot about the feudal blood running through his veins. Yes, who better to yell at than those who cannot answer back – shabash Wali, you do your cruel ancestors proud!

Though Wali the feudal made quite an impact in this episode, what is so commendable about this story is that we are also privy to his vulnerability. His friend’s unknowing joke about Wali having two wives hit a raw nerve. One can only wonder at how much this bitter truth,

his being married off to an older woman to uphold a bizarre custom, must have impacted Wali’s teenage years. An ugly, dark burden to bear, when he still has difficulty wrapping his head around this relationship, how can he expect anybody on the outside to understand his relationship with Mahjabeen? Frustrated with his inability to share the cause of his worry, he lashes at out, in now familiar manner, at the hapless Salima. Much as I hated Wali for being so cruel to Mahjabeen, I felt his inner turmoil in that moment. Fawad continues to impress with his take on the various shades of Wali’s character.

While Wali has had years to come to terms with the unfathomable realities of his life, Neelam is a rank newcomer into the darkness that the permeates the lives of the inhabitants of the haveli. She is like a breath of fresh air, somebody still naive enough to question the status quo, one who brings an indulgent smile on Wali’s lips, if only for a fleeting second, then its back to him hiding behind the dark glasses. Though her arrival stirred up quite a maelstrom in the shadowy corridors of the haveli, the person at the middle of it all, Neelam is no more than a very confused teenager. Like Wali she, comes from a world that no one around her can understand.

Driven by loneliness to share her feelings with imaginary friends, one is really made to feel for this girl/woman, who is in the throes of her first crush, her husband. Unlike her husband, who rarely shows any emotion, she is thrilled to hear him say that he will miss her. Whether a mature man like Wali is really smitten by this young child’s charm, or is saying that to placate her is something that’s open for discussion. For now, Neelam is basking in the glow of what she thinks of as Wali’s affection for her. Kanza’s been facing a lot of criticism for her portrayal of Neelam, and while I echo all that, I have to say that for the first time I actually felt Neelam’s character come alive. Kanza was convincing in the car scene, and then later at the tree scene, aside from her enunciation,she did a pretty okay job.

Feel as one might for Wali and Neelam’s predicament, it is Mahjabeen who is being pushed beyond all limits of human endurance. She’s already paid the highest price and has nothing left to give. Why is it then that everybody around her is bent on extracting their pound of flesh – even Wali, the child she raised and thought she knew so well.

How much more does this woman have to endure? The window into her past illustrates how her relationship with Alamgir played out. No longer the carefree girl we saw in the earlier episodes, this girl was much more concerned about the delay in solemnizing her relationship with Baray Sahab’s son. Unlike before, Mahjabeen did not seem as easily persuaded by Alamgir’s charming consolations, the furrow between her eyebrows seemingly a permanent feature by this time.

The sense of impending doom that she had felt then, is back to haunt her again, as Mahjabeen frets over the almost overnight change in Wali’s behavior towards her. Her repeated visits to his bedroom, seeking answers and perhaps some solace, was beautifully done. 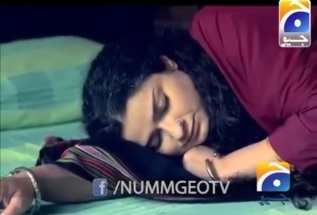 That she left her hairpin there and Wali’s nonchalant response to finding it indicates he is used to Mahjabeen walking in and out of his room. Since his childhood she’s been his primary caretaker; even now she is the one in charge of keeping his life smooth, down to ensuring his clothes are properly cleaned. He might have been a complete ass with her, but at the end of the day is still concerned when he doesn’t see her around. His checking in on her, his concern and the change in his evening plans all speak to the very complicated relationship they share. The range of feelings that Sania brings to her character is simply amazing. I say this every week, but have no problems reiterating that I am simply in awe of this woman’s talent. 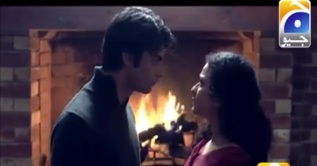 Superbly written and very well-directed, Numm continues to go from strength to strength. Sania is amazing and Fawad brings something very different to the table; the chemistry between them is crackling and their living room confrontation was smoldering. The very deliberate emphasis on Mahjabeen’s name spoke volumes of Wali’s determination to limit this woman’s hold on him. While all other aspects are working, and thank god we did not get innumerable versions of the same episode, the loud background score is a huge buzz kill. Along similar lines, while I think the OST is one the best ones around, its over use is absolutely killing its impact. We do not need every scene explained to us via the OST lines – please use it sparingly! Also, some scenes were over long. I think Sania is brilliant as Mahjabeen, but the editor needs to use his scissors judiciously with her scenes.

While this latest installment offered us a closer look at Wali, Mahjabeen and Neelam’s lives, it also left us with plenty of food for thought: Whose name was Mahjabeen mumbling in her sleep? Is he the young man we saw visiting Mahjabeen? Why did Wali look concerned after hearing that name? Who’s Allah Rakhi, the lady whose grave Wali specifically looked for and offered fateha at?

Looking forward to reading your take on the episode and hearing your thoughts on the questions we’ve been left to grapple with!