This exchange, between Wali and Baray Sahab, has to be one of the warmest, not to mention the most “normal” conversation we’ve seen so far between any of the characters in Numm. 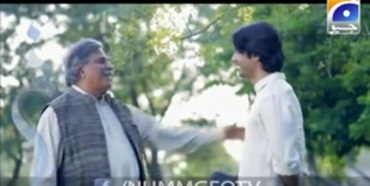 It was heartwarming to see that the two actually had a relationship, one where they talked to each other like friends rather than the adversaries they had seemed to be in the past episodes. What we saw today was not the outcome of something that had happened a day or two ago, rather this bond had been forged over years, going back to when Wali was just a child and Sikandar Bakht an indulgent grandparent, who rushed to fulfill his grandchild’s every desire. Since then this relationship had seen its fair share of ups and downs.

The Wali we had met 4-5 weeks ago was someone who was frustrated and angered by the imperious demands of a feudal lord; his loving grandfather nowhere to be found as we were introduced to the hardhearted autocrat who had no problems informing his grandson that time had come for him to sing for his supper. The luxuries, the high flying lifestyle, the bells and whistles he took for granted, all came with a price – he had to marry because it was so decreed. Feudalism had claimed yet another victim. After Jahangir, Alamgir, Amtul and Mahjabeen, it was now Wali’s turn.

This episode marked a turning point in Wali’s life. He might have been a boy when Mahjabeen was made his vani, and he may have been ambiguous when he was informed about his marriage to Neelam, but the man we met today, the one in whom Baray Sahab saw his future, is no longer confused or unsure. This is a very different man, confident and sure of himself and his future course of action.

Wali, an extremely private man, one with a very strong sense of self, did not take

too kindly to being told off so unceremoniously, first by his chit of a bride, then Mahjabeen, followed by his mother-in-law, aur tau aur even the principal at the high school had the temerity to tell him how to deal with Neelam. Amo’s very loving reprimand was probably the last straw on the camel’s back. Done with being dictated to and called to task like an immature child, Wali grew up and became a man in this episode.

Cutting off the metaphorical umbilical cord, no longer seeking approval from the two eyes who had looked out for him through his growing up years, this Wali is not afraid to look Mahjabeen straight in the eye and assert his authority. The boy she raised had grown into a man she did not recognize.

Even if he had to fortify himself with liquid courage, this had to be done – enough was enough. He who was a feudal scion was not going to treated like a boy anymore. The quiet menace in Wali’s voice, as he directly addressed Mahjabeen, perhaps for the first time in his adult life, marked his steely resolve. No matter how torn he might be on the inside by his treatment of Mahjabeen, this had to be done. Not only was he laying the law down for the servants, but also making Mahjabeen’s position in the household very clear. The scene with Wali seated like the lord and master of his domain, Mahjabeen standing in front of him like a nobody, and the servants quailing in the back, was simply brilliant. A superbly triangulated composition, this scene was fabulously executed  by the director, his DOP and his two gifted actors. This was by far my most favorite scene of the episode – loved it! 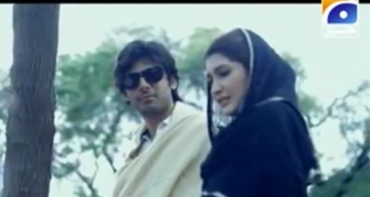 Neelam might think she now has Wali’s number and revel in the fact that he seems to be warming up to her, but methinks she’s once again jumping the gun. She might think all her transgressions are forgotten, but somehow Wali does not seem like a man who forgets easily.

Interestingly enough, even as Neelam is beginning to think Wali is hers, the other woman in Wali’s life is gradually waking up from deep slumber – conscious to the fact that she is still alive. Checking her appearance and noticing the silver in her hair, this is perhaps the first time she’s actually seen herself in years.

This colorless Mahjabeen, who lost her sense of self the day she introduced herself to her ten year old “husband,” is a far cry from the vibrant girl who had once smiled easily. The pain she suffered, the losses she bore, and the family she was forced to meet on the sly, all those years seemed to have passed by in a haze. Now, after so many years, it is Wali looking her in the eye, talking to her like she’s a real person, that serves as a wake up call. Mahjabeen did not die the day she became a vani  – she does still live. Things have come full circle… the real story has just begun.

Read within this context, the scene between Wali and Baray Sahab then takes on a whole other meaning. 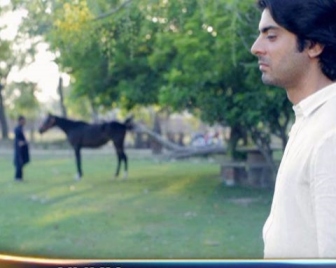 Was this merely an exchange of pleasantries between a grandfather and his heir, or was it something else entirely? Sikandar Bakht is nobody’s fool, he sees it all and knows more than he lets on. The back slapping, the smiles, were all about the autocrat expressing his joy at Wali’s coming of age. He is  thrilled that his grandson has stepped up to the plate and taken on the mantle of responsibility, making decisions of his own accord rather than looking here and there for guidance. Baray Sahab’s advice, don’t forget to ride, is equally meaningful. Wali’s marriage to Neelam is not just about the here and now, it was about ensuring the future. He can send his wife off to study and pursue the same path himself, but Wali must never lose sight of the ultimate goal – perpetuating the feudal legacy.

Yes, this was another very intense episode. Myra Sajid’s story and screenplay is brilliant- every word, every nuance, every scene has special significance. Ahson Talish has done an excellent job bringing this very intriguing story to life. The two actors, Sania  and Fawad keep raising the bar higher with every episode. While Fawad has dialogues to help him with his portrayal of Wali, Sania breathes life into her character with almost no lines.

It is hard to take eyes away from her face as she essays Mahjabeen’s anguish so very beautifully. These two are simply stellar together. Completely lost between these two dazzling stars is Kanza. Neelam’s is such an important character, a pivot around whom the story revolves, but all the important scenes with her in them are falling flat. Similarly the scenes with the actress playing Minahil are painful to sit through.

While Numm continues to impresses with its narrative, direction, pacing, etc, it is really faltering in the sound department. The background score continues to be a source of annoyance and now added to it is the bad dubbing and sound patching. I realize it is hard to maintain sound quality when shooting outdoors, but then the dubbing needs to be done with a little more finesse. The pivotal scene between Wali and his grandfather lost so much of it impact due to the really poor patching in of Fawad’s dubbed voice. In the graveyard scene too, it was hard to make out what Fawad was mumbling. Another important scene, Mahjabeen and the young Wali, also had sound issues. Please, could someone look into this?! Apart from these peeves, I’m hooked!