Throughout this latest episode Neelam kept goading Wali – every word she uttered, every gesture she made, every expression that ran across her face, all designed and calculated to aggravate and punish Wali. Who did this man think he was? How dare he tell her to behave? Neelam might have been forced by circumstances to marry an already married man, but if Wali thought that her entering into this union indicated her willingness to settle into a marriage of compromise,

then he has definitely been proven wrong. Fiery and fearless Neelam has absolutely no intentions of toeing the line and playing her assigned role of an acquiescent bahu of an izzatdar gharana.  Far from it! She is relentless and continues to push every button and testing every limit to make life miserable for Wali. He should not have ignored her earlier protests, now he would have to pay!

What Neelam seems to have forgotten in this game of one upmanship is that she is not dealing with an equally immature man. Wali might appear to be a soft spoken, gentle guy, but that’s all the on the surface. The urban lifestyle, the distance from his grandfather’s rural haveli and zamindari,

coupled with education at elite institutions, his stint abroad, and over and above all Mahjabeen’s gentle upbringing might have tempered the beast inside, but it has never been far from the surface. There have been many a signs – the clenching of the jaw, the steely glint of his eyes, the curling of his fists, the rigidity with which he holds himself, all pointing to a very complicated man, one who is perhaps hiding even from himself. Wali is as sophisticated as they come, as urbane as a man could be, but strip off the glitzy packaging and out pops the very traditional, much dreaded feudal – for whom nothing is more precious than his izzat.

Neelam is young and naive, and never has her immaturity been more apparent as it was in this episode when she out played her hand. Rather than biding her time, planning and hitting where it hurt the most, Neelam was too hasty and too rash.

Lacking the life experience to understand the many layered complex relationship between Mahjabeen and Wali, last week she unwittingly forced them to confront their real nature of their relationship. This week she once again started down the same track. While there is much Wali would might be willing to overlook, but a slur on his honor and character is something else altogether. He might hate his relationship with Mahjabeen, but then there is tremendous respect and unvoiced affection in this bond as well. To have something so intense and so personal spoken about so trivially was sure to infuriate Wali. To say that the slap shocked Neelam would be an understatement, but that it actually happened is something that shocked Wali even more.

At the heart of it all, most of Neelam’s complaints, no matter how she spins them, arise out of her insecurity vis-à-vis Mahjabeen – Wali’s first wife.

How much ever others try to convince her otherwise, Neelam remains fixated on the fact that she is the second wife. Ironically enough, it is thanks to her non-stop reference to their “marriage” that Wali and Mahjabeen are being pushed to re-evaluate their relationship, as two adults. Mahjabeen being the more mature one has already realized that she and Wali have turned a corner and can never go back to their earlier, carefully negotiated status quo. She had always known Wali was never hers, but still now that the time has actually come she cannot help but look back to an earlier, yet another forbidden relationship. With nary a word she has suffered so much, borne the burden of somebody else’ crime with so much grace – how much more can be asked of this woman? How much more can she humanly give?

Three episodes in and Numm keeps going from strength to it. I love the way this one is being unveiled, one gossamer thin layer at a time. A uniquely told story that relies more on the visual narrative rather than the spoken word, I am thoroughly enjoying the little gestures and subtle nuances that hold so much meaning. Wali’s smoking in Neelam’s presence as compared to his snuffing out the cigarette in Mahjabeen’s presence speaks volumes of how he regards the two women in his life. Mahjabeen’s fleeting, almost unnoticeable touch on his shoulder, urging Wali to accompany Neelam on her foolhardy bus trip, and his silent giving in to her wish, when he would rather have not gone, made for an exquisite moment. Kudos to Myra Sajid and Ahson Talish for resisting the temptation to over tell their story with explanatory dialogues. 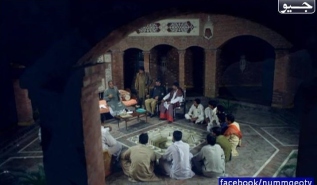 I like how the past has been beautifully woven in with the present and the two stories are being simultaneously narrated, creatively but with enough clarity so as to not confuse the viewers – very well done! Qasim Ali, the DOP, continue to make an impression with the way he plays with lights and scene composition. Rather than relying on the excessive use of closeups, I like that frames are opened up and we get to see so much more of the lovely setting, adding so much more to the ambiance and old-world feel of the story. The entire trip from the haveli to the Lahore house was really well executed. Another scene I liked was the panchayat scene, once again loved the setting and the shots, but here the editor was over-indulgent and let it it go for too long.

In terms of acting, Sania Saeed is just amazing. I cannot think of any other contemporary actress who could have done such justice to Mahjabeen – Sania is FABULOUS!

Fawad Khan’s Wali is an excellent match for Sania’s Mahjabeen. They barely say anything to each other but they are magical together! I missed Farah’s Amtul today.  I hope she will not be forgotten and we get to see more of her here. I have said this before and will say it again, acting alongside such powerful actors is not a joke, and for that alone I think Kanza deserves a pat on the back. She conveys Neelam’s anxiety and bravado to the the best of her ability. That said, her shrill voice, slurring of words, and over done reactions are sticking out like a sore thumb in what is shaping up to be a fabulous project.

And finally, how can I end without a mention of the surprise cameo by Sarmad Khoosat. Minus the gandasa and the wig, Mahjabeen’s lighthearted interlude with her mustachioed secret love was just what the doctor ordered in an otherwise very intense episode. It was great to see the two together after ages – can Manto come soon enough? Meanwhile I am happily enjoying Numm – two thumbs up!!