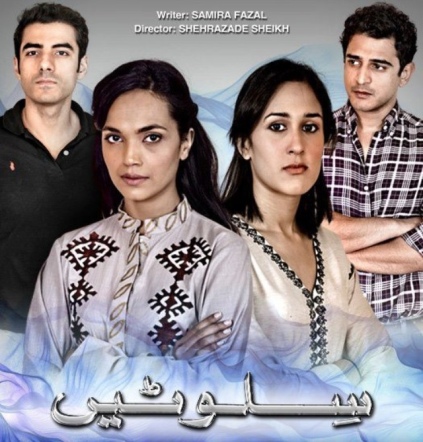 Chotu bhai sahab, wake up!! We women are complicated creatures… yes, we do want a man who has all the qualities listed above, BUT we also like our men to have a little more of a spine, display a bit more gumption. Easy as it may sound, it is a bit more complicated than it appears; lean a bit to the left and you are in trouble, wander over to the right and you’ll land in an an even bigger mess – in other words, being THE man is all about blending silk and steel just right. Kehney ka maqsad yeh ke Bilal bhai sahab, ab yeh chotupana choro, take a leaf out of your older brother’s playbook and start acting like a man rather than a jellyfish. Yes, Natasha is the biggest idiot around, magar ab tau jaisi bhi hai biwi hai na, woh bhi ki aap ki apni choice … you cant just be letting her run rings around you. Your wife needs the riot act read out, and don’t you think you should be the one doing the honors here? Aap ke ghar walon ke saath saath hum bhi us se bohot tang aa chuke hain. Umeed hai ke aap ko meri baat samajh aa gayi hogi – thank you!

Do I even need to say Daniyal Raheal and Mira Seth are simply fabulous as the most dysfunctional couple of the year!!

So yes, as you can guess, this latest episode revolved around Natasha’s increasingly annoying neurosis. Now that Zaib has miraculously turned over a new leaf, she’s finding it a challenge to convince others of the changes in her. Forget about her whacko sister, Mikaal, Rayaan, Bilal, and Muneeze, all have a hard time adjusting to this Zaib, who is almost a stranger. I am glad that we are being shown this resistance to the new Zaib, otherwise it would have been really hard to empathize with any of the characters involved. Thankfully we were spared having to stretch our imaginations to that extent and we saw Muneeze gradually softening up, and Rayaan being polite but distant. No surprises here that once again Bilal was the easiest one for Zaib to win over. Honestly, Samira and Shehrazade, yaar aap log is bande ko kahan se dhoond kar laaye ho?

Unlike Bilal, however, Mikaal chooses his words carefully, and subtly tells Zaib that she might feel all warm and gooey now, but she still has a long way to go. Its not that easy to change the habits of a lifetime, and we see that reflected here as well. Even as Zaib has changed and become more subdued, many of her older traits are still very much in evidence. The way she jumps in and promises Rayaan and Muneeze that she will talk to Natasha about her behavior with her in-laws, clearly essays that even as she has indeed come far, there is still a long road ahead of Zaib. Aamina Shaikh is the perfect Zaib, essaying the various shades of her character to perfection. The transformation in her tone and demeanor is something that has to be seen to be appreciated. Along with Aamina, Vasay Chaudhry continues to shine as the very mature Mikaal. I am so glad that this track was not completely cut off, rather still remains very much woven in within the larger narrative.

Rayaan’s is another character which is slowly coming into its own. He doesn’t say much, but Adeel Husain’s expressions and body language speak volumes about Rayaan’s unease around Zaib, his extreme patience with Natasha and his silent bucking up of Bilal to stand up for himself. After all, there is only so much an elder brother can do – these are Bilal’s battle and he’d better learn to stick up for himself!  That said, the chemistry between Zaib and Rayaan is already smoldering, and the late night study scene was very good. Since I watched a really dark blurry print, I  couldn’t exactly make out the specifics of Mikaal’s text and Rayaan’s response to it, but from the little I gathered, it seems like we are in for a fun ride.

With all these happenings in the US, the girls’ already clueless mother seems to have lost yet another marble or two. Can we please send her to some kind of a rehab center, where she can be injected with more than a few vials of something called a reality check?! Yaani ke had hai! Aunty ji keeps talking about sending and bringing back Zaib as if she’s gone to get candy from some nearby paan ki dukaan! Woman! Wake up and smell the roses! And here, I really cannot understand the dad either. Why does Uncle think his only job is to bharo thandi aahen,nod his head and give long suffering looks to his wife… Uncle ji aap bhi ab kuch jaag jaayen!

Now that Zaib has chalked out her space in her younger sister’s household, her friendship with a more reflective Muneeze rekindled and Bilal in her corner, I wonder how long it will take for the once-bitten-twice-shy Rayaan to allow her to get past his defenses. More importantly, how will Natasha respond to Zaib’s invasion of her domain? Seems like we’re in for some fireworks in the coming episodes – looking forward!