As Bibi sobbed her heart out that night, weeping at the unfairness of it all and bemoaning the talkhis that life had handed her, little did she realize that swept away by the force of her agonized wails were Zoyee and Jugnu’s happy dreams, them living together with Bibi in a little house, with bay windows and a badminton court.

And Bibi loved them a little less …. very less actually…

Just the thought that children should have to even question their parents’ unconditional love is very disturbing,

but for a parent to berate their offspring, holding them responsible for all that has gone awry in their own lives, is beyond cruel. And Bibi did just that; forgetting in her anguish that she was venting her frustrations in the wrong direction. Unable to say anything to others, she channeled all of her years’ worth of pent up hatred towards the most innocent of all the Silverwood residents – Zoyee and Jugnu.

Lizzie, another unfortunate victim of her parents’ on-off-now-perhaps-on- but-maybe-off relationship, joined hands with her runaway cousins to became an unexpected third fellow traveler on the quest to go as far away as possible from Silverwood, away from parents who were not yet emotionally ready to become parents.

Giving birth to children might make one a parent but to actually BE a parent, take on the responsibility of another human being, requires a level of emotional commitment which neither Bibi nor Jaanu, or for that matter even Margaret, were capable of making at this point in their lives. To be fair to her, Bibi did try, but in the end the talkhis of Silverwood got to her as well. While the parents flailed around, among the other adults,  Appo though hawk-eyed, could not bring herself to own the neeli-peeli angrez ki aulad, and Mamaji was too lost in her own mind to be effective – collectively, all of the adults failed the children.

Then there were two …

Left to their own devices, the three children soon found themselves swimming in deep waters. The ensuing tragedy was sad, but not entirely unexpected. These were children after all – how could they be expected to think through things? We have yet to see any of the adults step up to the plate and accept responsibility, then why this unwarranted expectation from the children? After all weren’t they doing just what they had seen and observed around them. Actually in many ways, Zoyee and Jugnu were more mature than Bibi, Jaanu, Margaret, Mamaji and Ayee put together – they loved each other selflessly and looked out for each other. They were the linked twins… so far …

She was a very good planner
Because she knew it was always best to be prepared
Prepared….

And how well Appo prepared! Marshaling her thoughts together, this woman was not going to let grass under her feet while she sipped tea and contemplated her options. Nope, Appo was a woman on a mission. With crocodile tears that would have done any Lollywood heroine proud, she spilled out her tale of woe to the sympathetic policeman, detailing the slur that Baloo had brought on to the family honor.

Sarmad Khoosat need look no further than Appoji when casting for a drama queen in his film. I am seriously impressed by her acting skills – the woman’s talent is being wasted in useless gharelu politics!

Unlike our erstwhile film actresses though, this woman is nobody’s fool. The quicksilver manner in which her demeanor changed when she was alone with the children, threatened them rather, was just awe-inspiring. All of a sudden she was the judge and jury both combined. With poison dripping from every her every word, she put the fear of God in the already scared children, thus ensuring she got the desired results from them. Nobody or nothing was important in her mad quest to protect the family name. Be it Baloo being brutalized or the children being traumatized, for Appo the end justified the means.

A pickled life that could not be shared
Wrinkled youth and pickled futures …. 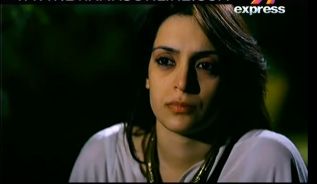 Passage of time has not helped fade the bone-deep scars left behind by these traumatic events. The past is very much present in Zoya’s life. The pain is evident in every word she speaks. Even today, her eyes get clouded as she looks back to that night, when Bibi had banished her and Jugnu from her life. With so much emotional damage is it even possible for Zoya to heal? It is a testament to the strength of her mental makeup that she has come this far, but perhaps this journey from the the present to the past and then back again has been more draining than she thought it would be … can one then blame Zoya for wanting to escape this pain by seeking release in death? At thus point, the idea of eternal sleep must look very seductive indeed. Perhaps it is now time for Jugnu to make his much anticipated entry.

In a serial where each episode has surpassed the last one, this one was head and shoulders above the rest. I have no more words left to praise Bee Gul’s writing and Khalid sahab’s direction. Naveed Malik’s cinematography has been as important a character as any others in the serial. The gradual buildup to more closeup shots of the older Zoya, are an excellent way of moving the narrative forward, from the past to the present, from Zoyee to Zoya.

I loved how creatively Lizzie’s death was shown and we were spared all the rona-dhona and the gory close-ups of the dead body. The shot of Zoya curled up on the charpayee, followed later by the shots of water dripping from Lizzie’s dress sent chills up my spine. And yes, speaking of chills, Hina Bayat is in a whole other league in this serial. She is magnificent! Bibi’s helpless cries, her angry rants, her defeated silence and finally the furious smashing of the vase, a whole range of emotions was beautifully essayed by Sanam Saeed. Mehak keeps impressing with every episode as the focus is slowly shifting from young high spirited Zoyee to the almost defeated, very tired Zoya. Over and above all, though, Talkhiyan is a story about children as seen through the eyes of children, and as such it was important for the kids to perform well. And WOW! Have they performed well!!! Sabina and Sagar, you guys are brilliant!