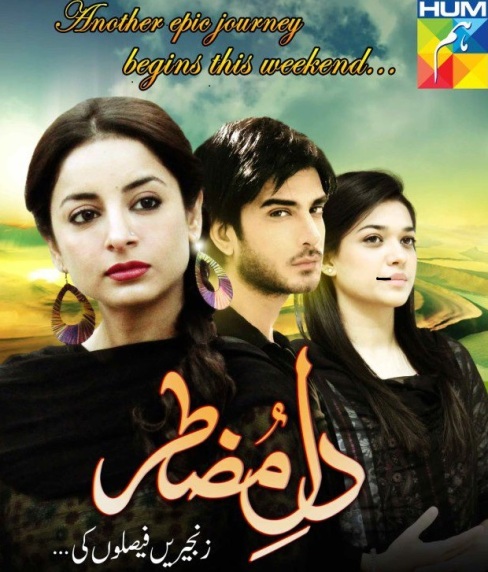 Dil-e Muzter, the distressed heart, is the latest offering from Momina Duraid’s MD Productions. Directed by debutante director Shahzad Kashmiri and written by well-known writer Aliya Bukhari, Dil-e Muztar heralds the return of Imran Abbas to Pakistani TV screens, and reunites him with Sarwat Gilani – looking forward to seeing this charismatic pair together again. Along with these two experienced hands, this serials also marks the entry of a fresh new face in Sanam Jung. I enjoyed seeing her here with Imran Abbas, they are stunning together!

Dil-Muzter is the story of Adeel, a fatherless young man living in his uncle Zaman’s house along with his mother Zehra. As clichés go, yes, Zaman’s is the quiet, almost absentee, presence in the house. We see him at meal times and watching TV etc, but beyond that he does not appear to have much say in the running of the household. His second wife, Safina, is the queen of the realm. Safina takes special pleasure in lording it out over the bechari, overworked Zehra bhabhi, reminding her 24/7 of all the ehsaanat they are doing on her, bearing the expenses of Zehra and her son. Its no wonder then that Adeel has grown up to be a very sensitive and khuddar man, very much aware that they are living on door parey ke chacha key reham-o karam pe, and that his mother is no better than a servant in this otherwise very well-off household.

Adding in the masala factor to the story is Sila. She is Zaman’s daughter and Safina’s step daughter. Playing the rehamdil shehzaadi role to the hilt, Sila is very sensitive to the tension in the household and fully aware of the way Safina treats Zehra. What is interesting here is that even though Safina has no love in her heart for Zehra and Adil, she seems to have a soft corner for Sila. She not only treats Sila well, but also wants to get her married to her sister Shaista’s foreign-returned son Munib. Sila on the other hand, makes no secret of her affection for Zehra and her son.

As far as stories go, this was a pretty average opening chapter, with no aha moments or shocking twists. What did surprise me though was the cliffhanger. Throughout, Zaman and Safina had been discussing Sila’s rishta, but there was no sense of urgency in their conversation, why did they then put Sila in such an awkward situation? Illogical and far-fetched, the final scene made a hash of an otherwise pretty even episode.

My peeve with the story aside, I must say this was one of the most visually stunning episodes ever. Every frame was beautiful. Imran Abbas is very good looking, yes, we know that, but I doubt if he’s looked better. The opening sequence, Adil getting dressed juxtaposed against Sila walking outside, was so well-shot and put together that it seemed like we were watching a film. Like Imran, Sanam too looked stunning. Every nuance on her face was lovingly captured. Shots of Imran, dwarfed by the towering Zaman mansion, as he contemplated his life while sitting alone at night in the garden, showed quite clearly that yes, this was Shahzad Kahmiri’s vision coming to life under the skillful hands of his DOP Irfan Resham. Whether the story manages to rise above the clichés is something we will wait to see, but I do know that we are definitely in for a visual delight… heck, even mundane everyday carrots and cucumbers look extra appetizing under Shahzad’s direction!

All in all, this was a pretty good first episode. Shahzad Kashmiri has shown himself to be an interesting story teller, lets just hope the story does not let him down. The one good thing here is that I understand that this is an original script, so I’m happy that we are spared the constant comparisons. Lets hope this is an indicator that we are over the adaptations craze, because I know I’m finding it all too overdone now. On the technical side, the production facilities and editing were great. My one request, is to the sound editors, could we please lower the volume on the background music? And, on the issue of music, a round of applause to Waqar Ali for the OST. Alycia Dias’ soulful voice does full justice to Imdad Hussain Imdad’s lovely lyrics.

The cast gave a good account of themselves, and it was great to see Imran Abbas back after a long time. Sanam Jung was impressive in her maiden outing. Among the seniors, I wish we could see Saba Hamid in roles other than these same old roles, where even her dialogues sound the same. Mohsin Gilani is another one who seems to be quickly getting typecast. Looking forward to seeing how Sarwat and Aijaz Aslam fit into the story. Waiting to seeing how this one unfolds!